On Sunday I checked out from the hotel and enjoyed the breakfast, basically the same as the first picture here. Which is cool, the best way to start a day is with a good breakfast in the morning. 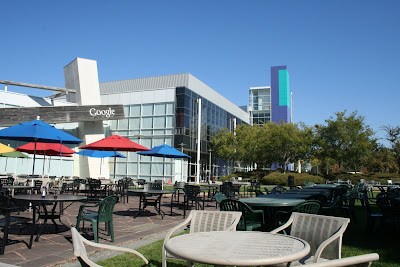 At Google I finally met with Bart Massey, who works at the Portland State University where I was an intern (in 2005) and also he was sponsoring one SymPy GSoC student in 2007. 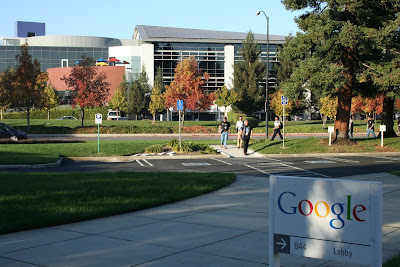 Then we started to port SymPy to Jython with Philip Jenvey. I first installed openjdk-6, which is in Debian main, then checked out Jython svn, typed "ant" and it just worked. This is so awesome, that we finally have a truly opensource and fully working java implementation in Debian. Philip fixed some bugs already, so SymPy imports just fine. Most of the tests run, but also quite a lot still fail.

We managed to isolate two bugs: issue 1158 and 1159. Then there was an annoying recursion bug, that took us several hours to dig into and I then had to leave at 6pm without a clue. But Philip kept saying, I just need to look more at the java stacktraces that Jython was generating and I'll figure it out. And he did! The next morning he filed an issue 412 in the PyPy tracker, because they seem to have the same problem. There are subtle differences in how to handle __mul__ and __rmul__ methods that are not well documented, so it works in CPython but fails in Jython/PyPy. I think we can fix that in SymPy too in the meantime, so I am very excited, because it seems SymPy will work on top of Jython soon.

There was also a git vs hg session with both hg and git developers. Since I recently switched from hg to git for all stuff where I can choose the vcs, it was very interesting for me. And I must say I am glad I switched. Mercurial works fine enough and with the recent rebase feature I think it is usable, but git just has a bigger momentum at the moment and it just doesn't get in my way.

During the day Steve sent an email to the GSoC list that Dirk forgot his jacket in the hotel room, so I said to myself, haha, that's a pity. And then I realized, oh shit, I left my jacket there as well. They didn't have it in the evening when I stopped there, but fortunately they sent me an email yesterday that they found it, so I'll stop there on my way back.

We also took couple of group pictures, here is just my lame attempt (I am sure people will soon post better ones): 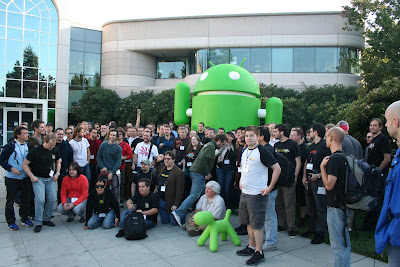 On Monday morning I met with Fernando Perez, the author of ipython, he know works with Jarrod. Then I rented a car and came to visit Brian Granger and his family in San Luis Obispo.

We went to the beach in the evening: 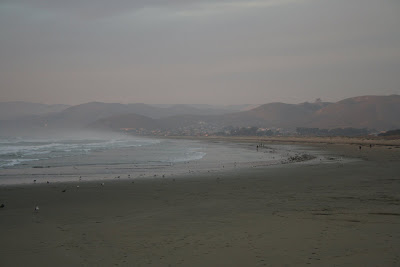 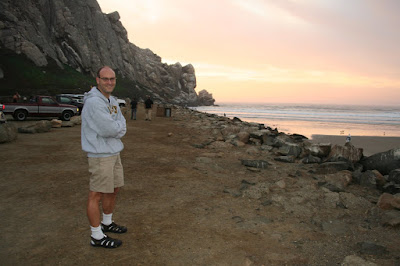 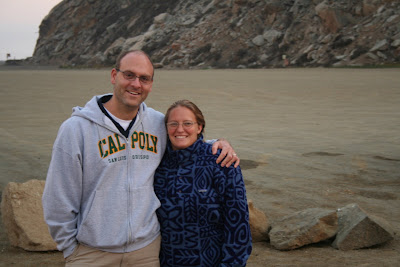 And had a dinner together. Brian showed me his options pricing example he did with SymPy, so I made him create an issue 1175 with the code.
Then we played with the parallel stuff that Brian contributed to ipython and we tried sympy with it and to our disappointment, we found pickling bugs in sympy, it works with protocol 0, but not protocol 2, see the issue 1176 and 1177. This almost smells like a bug in Python itself, but I need to investigate that later more deeply.

Today is Tuesday and we'll work on doing atomic physics calculations with sympy. See also Brian's email to the sympy list about it.
Posted by Unknown at 8:23 AM No comments:

On Saturday morning I met Steve McIntyre and Dirk Eddelbuettel, Steve took us by car to Google. Well, it was overwhelming.

For example we met there two other Debian developers, Jeff Bailey and Daniel Burrows. There are developers from all the famous projects, like git, Wine, Turbogears, Jython, ... There are still people I wanted to meet but didn't manage yesterday, need to fix that today. My plan is to get SymPy running on top of Jython, or at least do some more progress to take the advantage, that Philip Jenvey from Jython is here. Also I wanted to fix some RC bugs in Debian when Steve is here, to make some progress on my NM finally. We'll see how it goes.

There was also an excellent presentation from people behind Android. One thing I was curious if it's going to run native C applications, like Python and it seems it will happen eventually, all the sources are out there, so someone just needs to push it forward. Another very cool thing they did that I was always looking for is Gerrit for reviewing patches (see review.source.android.com for example how it looks like) -- basically a fork of Guido's codereview, but it has many nice features, like automatically applying the patch to the git repository as a new topic branch and one can then easily pull it, as well as review it over the web interface. When I get back to Prague I am going to install this for SymPy.
Posted by Unknown at 8:47 AM 1 comment:

I flew via Atlanta and had only about an hour to my next flight to San Francisco, so after my last experience, when I went to the immigration, got stuck in the line for more than an hour and then had to run to catch my flight, I decided to try a different strategy this time: first run to the immigration and then walk to my gate. Unfortunately I was sitting near the back of the plane and I got out among the last ones. Fortunately, it was several hundreds meters to the immigration, so I run as fast as I could and I managed to get there as the first one and everything took about 5 minutes. That was just awesome, I finally figured this out.

Jarrod was waiting for me at the airport, went to his place. Here's his cat: 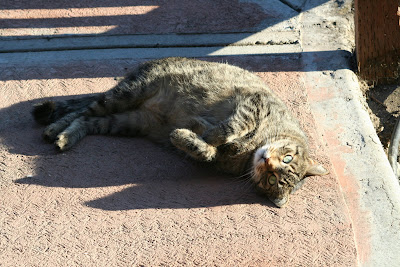 On Friday we did some work and then went to the Golden Gate, the traffic was quite dense: 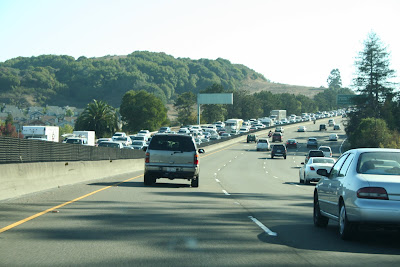 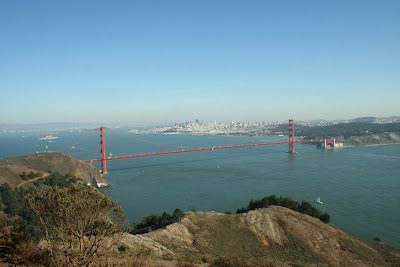 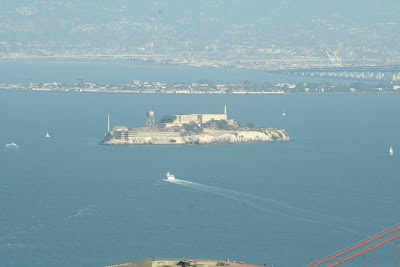 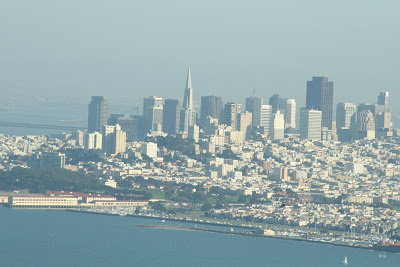 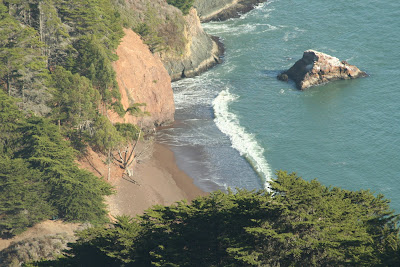 Then we had a cofee in San Francisco and went to Silicon Valey, Jarrod drove me around a little bit to see SLAC, Stanford campus and other things. In the evening we went to the common pub with other mentors and Google guys, where we for example met with Robert Bradshaw.

Today I am looking forward to meet with all the people I know from mailinglists, Debian and other places.
Posted by Unknown at 7:24 AM 1 comment:

Gael and Emmanuelle in Prague

Last weekend Gaël Varoquaux together with Emmanuelle came to Prague, so it was really awesome to meet again (we first met with Gaël at the SciPy 2007 conference at Caltech).

Because I recently finished my master, I was basically visiting pubs each evening, so we first met on Friday at 10pm and just had couple Pilsens (I already had some beers that evening with other friends), then I had to go, as I was doing TOEFL on Saturday. At the exam I met a very beautiful girl and other interesting people, so we went to lunch together and as a result I arrived half an our later than we agreed with Gaël and Emmanuelle, but I think they understood my situation. :) Then we went around Vyšehrad, came to I.P.Pavlova, had some Czech meal and beers, then went on foot pass the Church of Saints Cyril and Methodius, where the Heydrich attackers were cornered (there is still the bullet-scarred window visible from the street), then continued over the bridge to the hotel, Emmanuelle went in, I then came with Gaël to another pub for couple of more beers.

The Python scientific community is very cool and I always enjoy meeting people from it and discussing things like cython, scipy, ipython, mayavi, sympy, matplotlib, sage, what license is best for each project, etc. in Prague pubs. Python has a lot of high quality libraries and tools for scientific computing, so things look very promising.

It was fun I really enjoyed that.
Posted by Unknown at 12:19 PM No comments: