I attended the SciPy 2009 conference last week at Caltech.

When I first presented about SymPy at the scipy 07 conference exactly 2 years ago, it was just something that we started, so noone really used that. Last week, there were already 6 other people at the conference who contributed one or more patches to SymPy: Robert Kern, Andrew Straw, Pauli Virtanen, Brian Granger, Bill Flynn, Luke Peterson.

I also gave my experience with designing a traits GUI for FEM lightning talk (seek to 5:35).

My advisor Pavel Solin gave a talk about Hermes and FEMhub and other things that we do in our group in Reno.

Besides that, it was awesome to meet all the guys from the scientific Python community, meet old friends and also get to know other people that I only knew from the lists. I was pleased to meet there people who solve PDE using Python, we had many fruitful discussions together, and as a result, I already created FEMhub spkg packages for FiPy, other will follow. Our aim is to create a nice interface to all of them, so that we can easily test a problem in any PDE package and see how it performs.

Overall, my impression is very positive. I am very glad I chose Python as my main language many years ago, all the essential parts are now getting there, e.g. numerics (numpy, scipy, ...), symbolic (sympy, Sage, ...), 2d plotting (matplotlib, ...), 3d plotting (mayavi), GUI (traits UI, which supports both GTK, QT on linux and native widgets on Mac and Windows, and Sage notebook for web), excellent documentation tool with equations support (Sphinx), lots of supporting libraries, like sparse solvers and then very easy way to wrap C/C++ code using Cython and to speed up critical parts of the Python code using Cython. It's not that each of those libraries is the best in the world --- in fact, not a single one is --- but together as an ecosystem, plus the high level of (free) support on the lists for all of those libraries, this in my opinion makes Python a number one choice for scientific computing, together with C, C++ and sometimes Fortran for CPU intensive tasks and/or legacy libraries.
Posted by Unknown at 10:18 PM 4 comments:

SymPy on the google phone

Here is a proof that sympy works on the google phone: 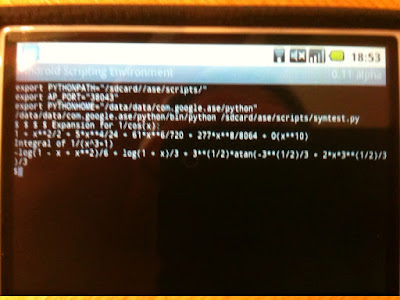 Thanks to Rae S. Yip from Caltech and Nicolas Pinto for taking the picture.
Posted by Unknown at 7:08 PM 1 comment:

Last weekend, Luke and Aaron came to visit me here in Los Alamos and we accomplished the following:

Pictures of the last item were requested, so Aaron (left), Luke: 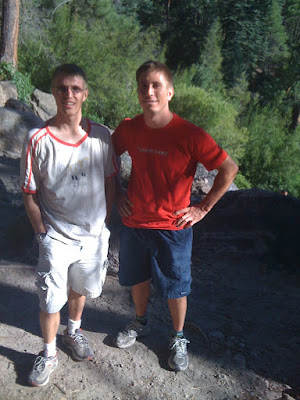 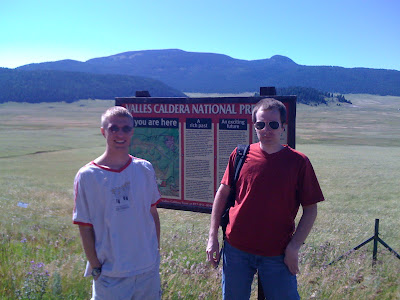 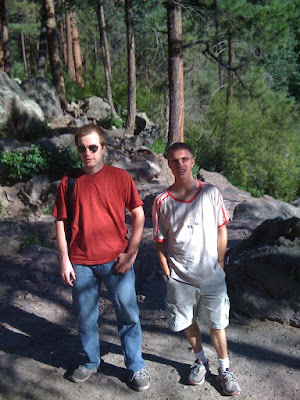