SymPy is a pure Python library for symbolic mathematics. Last year SymPy had 5 excellent students and this year we are accepting students again.
Why should you apply? And why to SymPy?

Well, let me give you some reasons:

Read also the current status and motivation of SymPy and it's relation to Sage. If you want to apply, all the necessary information is on our wiki page.

Nevertheless, if you decide SymPy is not for you, but still you'd like to do GSoC project in a similar area, there are other good options too - one is SciPy/NumPy, the other is Sage. Unfortunately Sage was not accepted as a mentorship organization, but it has several good projects too, some of which you can do for example under the umbrella of the Python Software Foundation.

One of them is improving the Sage notebook. If you've never seen that - download Sage, start it (./sage), type "notebook()" and a nice Mathematica like notebook will popup in the browser. It allows collaborative editing ala Google Docs and many other things. If you'd like to work on it, reply to the email on sage-devel.
Posted by Unknown at 6:21 PM No comments:

Between February 29 and March 4, 2008 I attended the Sage Days 8, hosted at the Enthought headquarters in Austin, Texas. This was my 5th time in the USA and it was a marvelous experience, as with all my visits in the states.

As usual, I had some adventures in Atlanta, that interested readers can find at the end of this post. Anyway, on the Austin's airport I met Peter and his wife Crystal, Fernando, Benjamin, Jarrod, Eric and Clement. We went to have a dinner and then me and Clement were staying at Peter's house: 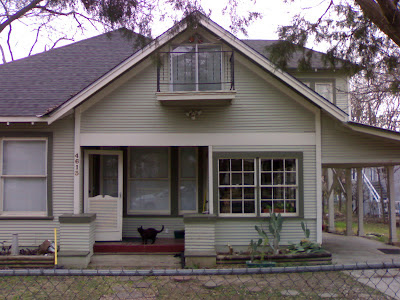 You can see the neighbor's cat and Peter's dog Trinity behind the window. The next day we went to Enthought, that was providing us with a breakfast and a lunch each day - and it was delicious. After the breakfast, we gathered in the room and introduced ourselves. Enthought rents 3/4 of the 21th floor in the Bank of America building, so when I looked left I saw: 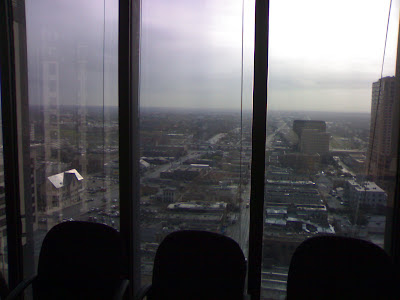 When I looked behind I saw: 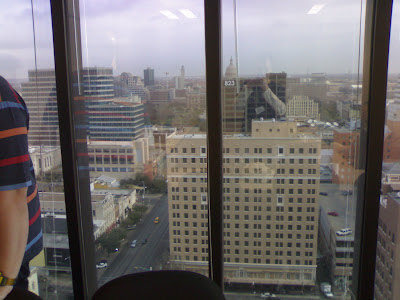 and in front of me, I saw all the participants (I took photos of all participants together with names). As you can see, there were really good people in there, like Travis (creator of NumPy), William (main author of Sage), Eric (CEO of Enthought), Fernando (author of IPython), Jarrod (the release manager of SciPy), Michael (the release manager of Sage) etc. See also the Fernando's welcome speech and the video of each of us introducting himself.

The views from the windows are terrific. I enjoyed working on each of the 4 sides of the skyscraper with completely different scenery, or when the sun is going down, that's also very cool.

We spent the whole Friday doing presentations, some of which you can find here. Then we went to Eric's house to have a big dinner together.

On Saturday, Sunday and Monday we were all hacking on many different things. I joined Fernando, Benjamin, Brian and Stefan on ipython1, Travis was implementing a new type (gmp integer) in NumPy, William wrote a manipulate command in Sage, Eric did the same in Traits, Gary and Michael implemented parallel testing of Sage, ...

On Tuesday we had final status reports and people left in the afternoon. In the evening we went with Clement to have a dinner and then we visited some bars on the 6th street, having a beer in each.

On Wednesday I visited John and Roy from the Computational Fluid Dynamics Lab at the University of Texas, Austin, who wrote the libMesh library, that I extensively used and also created a Debian package of. It was very influential to see the libMesh "from behind", also John and Roy are cool people (not mentioning the Debian tradition of having good relations with upstream:). Then I visited some professors at the same campus, after which I went into the Capitol and then I took the bus to the Barton Creek Square Mall to buy some ipods and jeans, so that I can say I have jeans from Texas. BTW, the ipod works excellent in Debian - I plugged it in and it just shows on my Gnome desktop. It's true that naively dragging mp3 files on it didn't make it play, but these instructions made it work.

On Thursday I fixed the remaining release blockers in SymPy and made a new release. In the evening, I am going to meet Aswin, he also uses SciPy and also is a friend of Kumar, who is now maintaining python-numpy and python-scipy Debian packages with me (Kumar also knows Prabhu, the author of Mayavi2 hosted at Enthought, so it's all connected).

Anyway, the whole workshop was an excellent experience for me. I learned a lot of new things and being able to speak with people who wrote tools that I use almost everyday is important. We also extensively discussed the future of all the projects (Sage, SciPy, NumPy, IPython, Cython, SymPy). See my summarizing email to the SymPy mailinglist.

Another thing, that I find very interesting is that Microsoft is financing the windows port of Sage, that will make basically anything that uses Python/Cython/C/Fortran very easy to install on windows (just a spkg package in sage). I find it really cool that MS is not only supporting but even financing a truly opensource project.

Finally the promised adventure in Atlanta: we took off the Prague airport on February 28th with a 2 hours delay (due to some paperwork as we were told by the captain). As I had 3 hours in Atlanta for the connection to Austin and I had to go through immigration, it was clear that I'll miss it. But I was not surprised, last time I was flying through Atlanta, they canceled my flight to LA completely. We arrived in Atlanta an hour and a half before my departure, then I was waiting for about an hour at immigration, it was incredibly slow. When I had around 20 min to departure, I had to ask people standing in front of me if they let me in, they were very nice and did. I was leaving immigration 10 min to my departure, then I was running to get my luggage and myself through customs and screening, it was 5 min to my departure when I ran down to the display with departure times. Then I was sprinting like hell to the terminal D to only see the clerk doing some final paperwork with all the people already boarded and the jetway door shut. After a little persuading he let me in too, fortunately there was still one seat left, so I made it. You can imagine my pleasant surprise in Austin when I discovered, that my luggage made it too, considering that I handed it to the Atlanta's airport personnel exactly 10 min prior the departure.
Posted by Unknown at 2:50 PM 3 comments: